Screen Captures from the trailer

view more images from this album 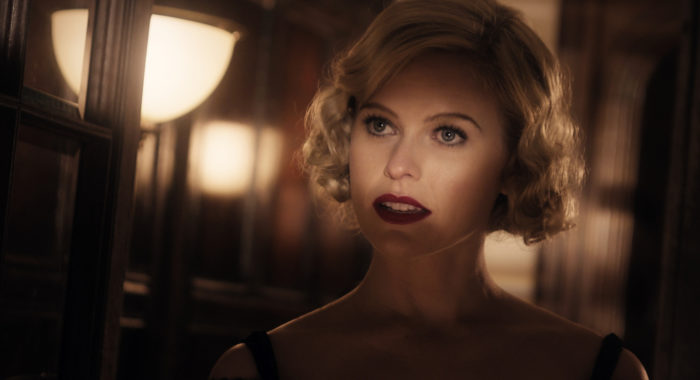 A cowboy, a mermaid and a bee walk into a lavish mansion. If you’re already sitting up and paying attention, Bees Make Honey is for you. A 1930s murder mystery, it’s a movie that leans into the dated feel of an old joke with such enthusiasm and energy that it’s impossible not to enjoy it and get swept along by its wit.

Alice Eve is on knockout form as Honey, a widow who hires an investigator (Inspector Shoerope – Wilf Scolding) to help her solve the death of her husband. From the off, she seizes the leading lady role with relish, a femme fatale playing the part of a femme fatale with a knowing dash of sass, smarts and shade. Her case? Get Shoerope to join her Halloween costume party, where everyone there is effectively reenacting the same shindig from last year, where her beloved kicked the bucket.

Costumes give way to extreme secrets, hidden plans and unspoken identities, while the production design captures the period vibe with panache, reinforcing the hint of artifice among the authenticity. Director Jack Eve zips across the stylish surface with dazzling visual flourishes, swapping about aspect ratios, slinging out split-screens and zooming into freeze-frames as he goes.

Part of the fun is seeing the announcement of a new filmmaking talent with such confidence – somewhere between Sofia Coppola and Baz Luhrmann, Eve feels like a unique voice racing to express every idea he can. (Adam Gough, whose CV ranges from In Bruges to X-Men: First Class, is an excellent editor, while Richard Stoddard’s cinematography and Ryan Beveridge’s score ooze a knowing class.) But the rest of the fun lies in watching the cast have so much fun with their roles, from The Halcyon’s Hermione Corfield as Honey’s amusing, glamorous friend to a scene-stealing Joshua McGuire, who, after a superb turn on stage in Rosencrantz and Guildenstern, is on wise-cracking, slapstick form.

The plot doesn’t amount to as much as you might wish, but the script (also by Eve) never fails to entertain, blending the absurd with the familiar genre tropes, while chucking in swear words to keep things feeling unpredictably modern. By the time Trevor Eve turns up dressed as Captain Hook, you’ll be grinning from ear to ear. Produced by Alice and Jack, this is a family affair – and, when it comes to old-school murder mysteries, Agatha Christie fans wouldn’t have it any other way. Somebody snap this up for UK distribution.

Acclaimed British actress Alice Eve is known for her work in film, television and theatre. She recently starred in an episode of Netflix’s hit series Black Mirror opposite Bryce Dallas Howard.

Her recent film credits include CIA operative Marta Lynch in Criminal, and Brooke Dalton in Before We Go. In 2013, she played Carol Marcus in Star Trek Into Darkness opposite Chris Pine. Alice will also star in the upcoming sci-fi thriller Replicas, alongside Keanu Reeves.

In Ordeal by Innocence Alice Eve takes on the role of Gwenda Vaughan. High heels and hourglass figure poured into her clothes. Former secretary to The Argyll Trust for Orphans and Neglected Children, Gwenda’s cunning has elevated her to the position of soon-to-be the second Mrs Argyll. 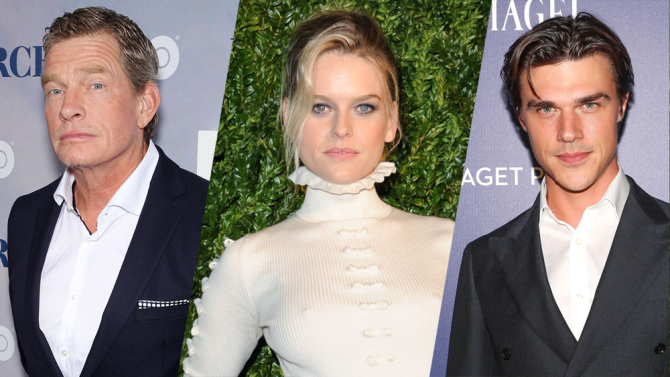 Content Media was acquired worldwide sales rights to British murder mystery comedy “Bees Make Honey,” the company said Wednesday. The film, which stars Alice Eve, is set to make its world premiere at the Raindance Film Festival in London on Sept. 23. Content will introduce the film to buyers in Toronto next month.

The sophomore feature of Eve’s younger brother Jack Eve, who wrote, directed and produced the film, “Bees Make Honey” is set in England in 1934. It sees Alice Eve’s high-society widow, hosting her annual Halloween costume party for her friends, secretly employ a police inspector to solve the crime of the murder of her husband that took place at the same event one year earlier.

“Jack has taken a traditional whodunit format, infused it with a Baz Luhrmann-like energy, and combined it with a wonderful old school British comedy,” said Jamie Carmichael, president of film at Content.

Australian director Ben Lewin’s latest film, Please Stand By, has been selected to screen at the Austin Film Festival in Texas. It is the first film by the Melburnian since his Oscar, Golden Globe and BAFTA-nominated 2012 feature, The Sessions, starring Helen Hunt and John Hawkes.

Please Stand By will premiere in Austin in October next to the season finale of HBO’s new drama from The Wire’s David Simon, The Deuce, and the new romantic comedy Amanda and Jack Go Glamping starring David Arquette and Amy Acker, written and directed by Brandon Dickerson.

I made this film. It's about abortion. I'm so happy to say it's been selected for @lashortsfest and screens August 4, 7.45pm at Laemmle 7 – North Hollywood. #LadyLike #abortion

Amazon is getting a major dose of Agatha Christie. The streaming studio announced the development of multiple TV series based on works by the iconic mystery writer — and the first will be Ordeal By Innocence, which already started production in the U.K. with actors Bill Nighy, Alice Eve, and Ed Westwick.

Run by Christie’s great-grandson James Prichard, Agatha Christie Limited, which manages the literary and media rights to the author’s works, partnered with Amazon on this deal. The goal is to add even more original offerings to the streaming platform’s roster of programming.

Ordeal By Innocence centers on the Argyll family. The black sheep, Jack Argyll, was accused of murdering their matriarch a year ago, but now a man shows up on their doorstep claiming Jack’s innocence. The family must come to terms with this news and the fact that the real killer might still be among them.

The cast is rounded out by Ella Purnell (Miss Peregrine’s Home for Peculiar Children), Matthew Goode (The Good Wife), Catherine Keener (Get Out), Luke Treadaway (Fortitude), Eleanor Tomlinson (Poldark), and Morven Christie (The A Word).Sarah Phelps, who worked on previous Christie adaptations And Then There Were None and The Witness for the Prosecution for BBC One, executive produces Ordeal By Innocence.

“The brand of Agatha Christie resonates around the world,” Chris Rice of WME, which brokered the deal, said in a statement. “We couldn’t be happier to have Amazon as our U.S. home for this franchise. We think the series of specials will attract great auteurs and actors to create compelling content for audiences everywhere.”

The series will be released internationally on BBC One.

As I head to Scotland to start work for the @Bbc for the second time (my first time was one scene with Cumberbatch, who was playing Hawking – before Eddie – and was a great set host) I am posting this video of what I did for entertainment behind the scenes of Nosedive, for Joe Wright. I am very excited to be working for @Bbc, which feels like home to me, my father having worked for them for so long. We are doing Ordeal By Innocence, an Agatha Christie adaptation and I play Gwenda. #ILoveGwenda.

Exciting News! We can confirm that The Stolen will be released in New Zealand in November 2017!!!